The small town of Camel Hill is nestled in the Sangre de Cristo mountains of southern Colorado, and nothing interesting happens there. Until local legend and corn maze auteur Bill Grabathy finds an asteroid, which happened to bring a murderous alien down with it.

Opening night of Grabathy’s Maze is a veritable holiday in Camel Hill, and when the alien gets loose, things get messy. Now it’s up to Cole and his childhood friends Sam and Jill to try and stop the alien before Camel Hill becomes a bloodbath. 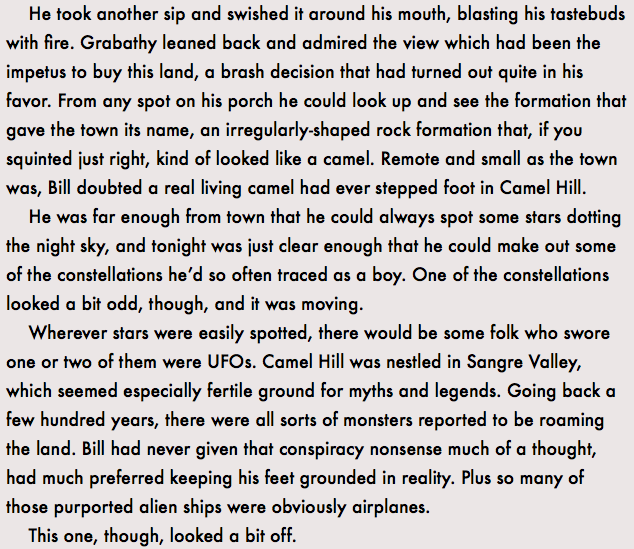 I’ve been serious about writing fiction since I was about 10 years old, but novels were still intimidating. They’re just so big, and even when I got used to the length of a feature screenplay, a novel is so much bigger.

I’d participated in National Novel Writing Month twice in college, and both times I hit the 50K word goal by the end of November. The first time I actually finished the novel and pretty much immediately hated it. The second time, I got pretty far and lost the thread and never wrapped it up. Since then, I’d stuck to scripts.

Until I moved to Denver, and then I decided to give a novel an honest effort. This book took me quite a long time to write, mostly because I was also in grad school and working full-time while working on it, and my attention wavered. On several occasions I wrote myself into a corner or would get so hung up editing what I’d written that I didn’t write anything new for weeks at a time.

Finally, I went for the final push and declared it done. Is it really done? Well, no, but I would wager that no story is really done. I finished the novel, though, and that feels great. Now it’s on to the next one.